Yesterday I did this thing where I made a journal drawing for every waking hour of the day. It was fun until the end of the day when I was sick of drawing and just watching tv for hours and didn't know how to document that.

It's not exactly adventure land over here, but I was awake for 16 hours. 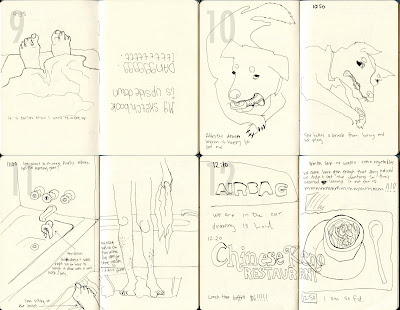 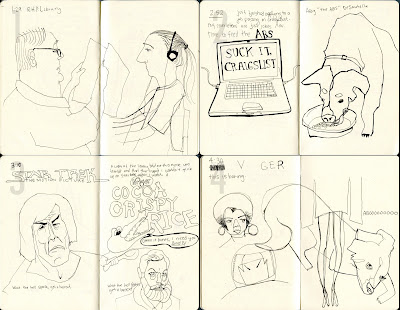 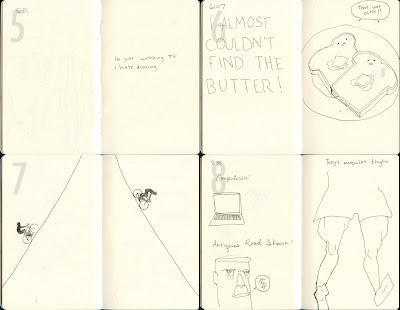 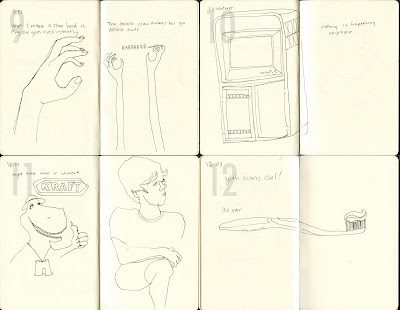 Posted by Nikki DeSautelle at 11:50 AM 2 comments:

Here is a painting I made as a 2009 re-do illustration for "The Walking Char" story I posted last time.
This lady is too old for adventures, but I wouldn't mind a trip that's for sure. 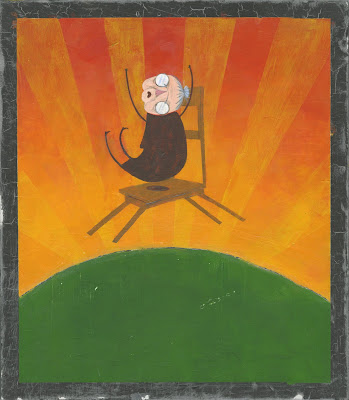 In lieu of new art, I would like to share two stories I found in a notebook in my parents' basement. I really have no concept of how old I was when I did them, I am estimating first or second grade. My spelling hasn't really improved since then.

I have transcribed the text below if there is any difficulty in legibility. Please note on the illustration for "Dangoros Pino (And Alafed)" that in addition to Alfred's plight, there is a mouse-sized parallel story simultaneously happening. It's pretty complex. 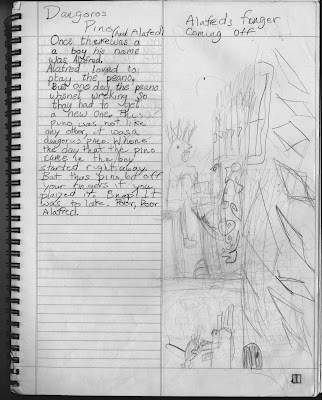 "Dangoros Pino (And Alafed)
Once there was a boy his name was Alafred. Alafred loved to play the peano. But one day the peano wasnet wroking so thay had to get a new one. This pino was not like any other, it was a dangorus pino. Whene the day that the pino came in the boy started right away. Bat this pino bit off your fingers if you played it. Snap! It was to late. Poor, poor Alafred." 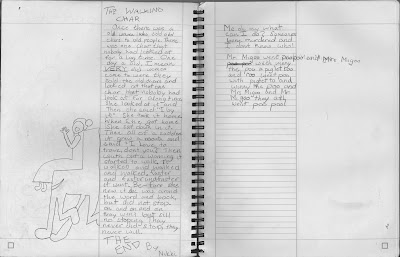 (left)
"THE WALKING CHAR
Once there was a old wowen who sold old chars to old people. There was one char that nobody had looked at for a long time. One day a old, I mean VERY old women came to were they sold the old chars and looked at that one char that nobody had look at for along time. She looked at it and then she said "I by it!" She took it home. When she got home she sat down in it. Then all of a sudden it grew a mouth and said "I love to trave, dont you?" Then whith out a warning it started to walk. It walked and walked and walked. faster and faster and faster it went. Be-fore she new it she was arond the word and back, but it did not stop. on and on and on thay went but still no stopping. Thay never did stop, they never will. THE END By Nikki"

BONUS MATERIAL (right)
These are probably the greatest lines of verse I can ever hope to write.

"Me oh my what can I do? Someones bene murdered and I don't know who!"

Man, I was so good at blogging and then summer happened and I stopped completely. BAD. I love summer though. Everything is better in summer. Everything but blogging.

Here are some things I've done!

I moved back in to my parents house. This is their dog, Abby. She is a horrible monster incapable of love. 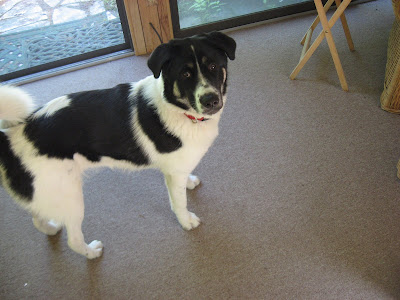 I bought this picture from CCS illustration fellow Ben Cloutier, it's probably my favorite piece anyone made all year. My favorite part is the nose. It is really inspiring to me. Noses are a really useful body part, but they are weird looking and hard to draw. I really enjoy different artists' different nose interpretations. 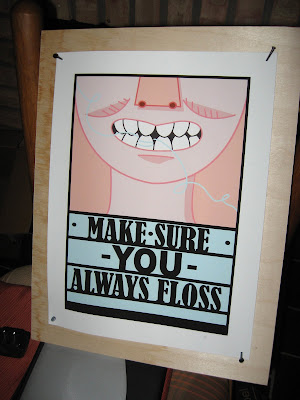 Another thing I did was I fixed up and painted my parents' mailbox. 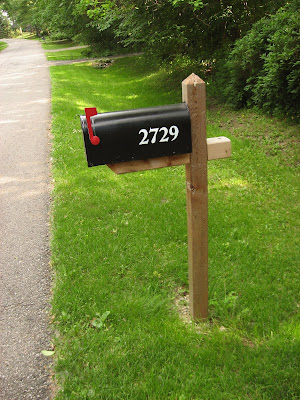 This was their old mailbox. 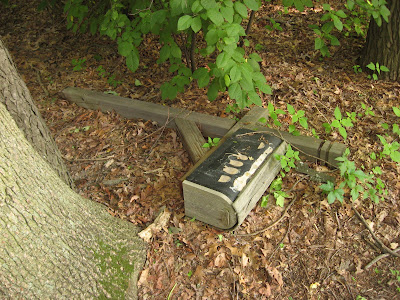 That's not the actual before-picture, it just looked like that, with wood bits falling off it, except standing upright. The mailbox in the picture was their mailbox before the current one, it's just lying there in the yard still for some reason. It's a little bit w.t. But whatever.

I also painted my old bedroom this beeeeeautiful blue color. 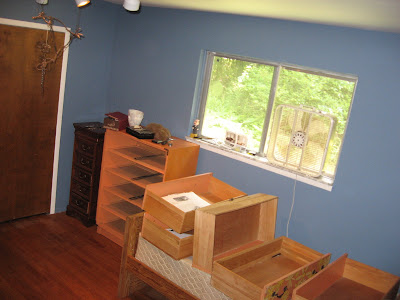 I'm going to keep all the furniture on that one side.

It was blue before, but uglier. Also it had this dragon on the wall that I drew when I was in the 8th grade. I was really big into dragons. 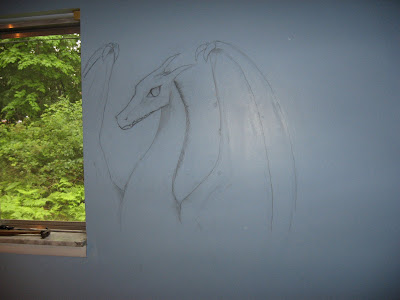 I also had to paint the ceiling, because it used to be black, courtesy of back when I was sad circa 2001. Painting a ceiling is the worst thing. Michelangelo probably painted the Sistine Chapel and was like "SO NOT WORTH IT" the whole time. I had to put 4 coats on it.

Instead of drawing, I've been trying to sew. I don't really know how to sew. But I am trying to learn. We have an old sewing machine, which I used to know how to work, but it has been malfuctioning. There are all kinds of knobs on it that you are supposed to turn to set it up with the right tension and stitch length and whatever, and I have no idea what they mean really. I've just been turning them randomly for years and it's worked out, but this time it didn't work out. So I've been doing it all by hand. That's fine because it's a nice activity to do while watching tv/internet-tv.

I made this little handbag, as a practice for a bigger version that will be more useful to me. A purse is only useful to me if I can fit everything I own inside it. I was halfway done with the bigger version when I got frustrated with some construction issues and had to take a break and make a small one first. 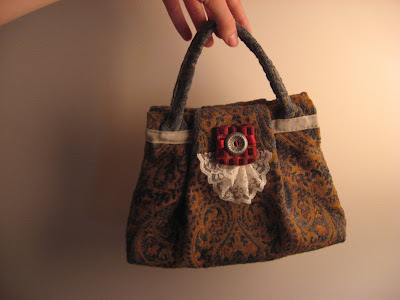 I also got a job working at the DIA, which I start on the 19th. COOL. I have less than a week of lazing to go. I've almost got my act together. I have a bunch of fun ideas for summer projects which I will start soon so get pumped.
Posted by Nikki DeSautelle at 1:11 AM 3 comments:
Newer Posts Older Posts Home
Subscribe to: Posts (Atom) 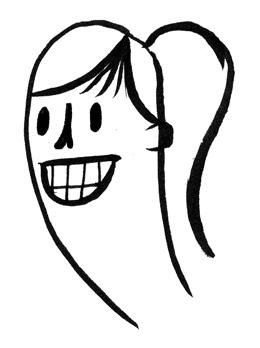